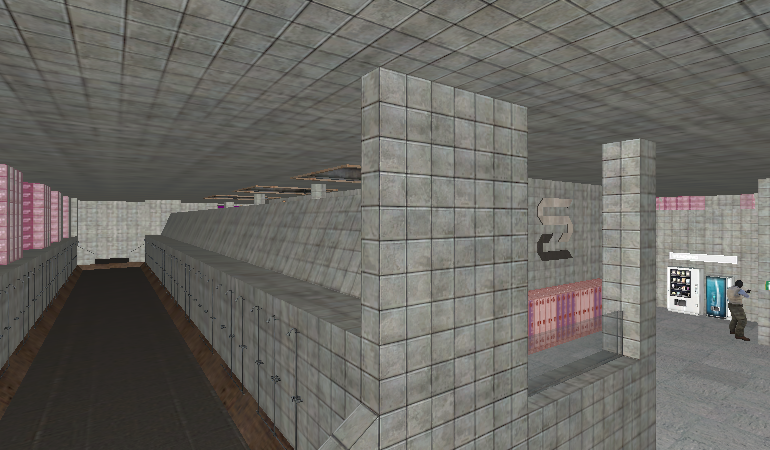 Today I messed around with custom textures and filled the skyline with a few more buildings. I also added more detail to the outside area.

The current logo for sneaK's Community is taken right from the banner, it may be temporary but I'm excited to create actual graphics for the map when I get a more substantial picture editing software.

Right now I only use Paint.NET but I intend to move onto Affinity Photo or Adobe Photoshop to develop graphics. My main focus is on learning more about Hammer Editor and modelling in Blender though since those programs are FREE and I'm a broke boy.

[0.6] offline version is now live /w changes I gauged directly from people playing on the server. Had troubles /w packing custom textures but next update [0.6.1] should properly feature the temporary logo I have on the billboard in the first screenshot.

The map hasn't been well received at all so far, but I'm not letting that deter me from trying to make it as enjoyable as I possibly can. I intend to make another map for splewis' 1v1 again and when I do I'm going to go for a more robust layout since I understand the short range fights on Lockers can tend to get boring right away.

I've added small windows to the middle area from the shower ramps to allow for more options in taking a fight and better info on whether or not someone might have crossed into showers. The spawns have also been deepened on both ends to increase distance between players when they first peek.

Since I want to keep the full length of the windows that peer outside to see the street, which I've put a lot of work into, there are some temporary cubbies in C.T. spawn that I'll probably fill up with something so that each spawn is practically identical just like before.

Letting players peek from behind the safety of the window on ramp will add a lot more depth to the gameplay and in my opinion it makes the map LOOK a lot bigger than it actually is.

I hope everybody understands the passion I have to create maps and more importantly: maps that people will enjoy. If you have any feedback, especially if it's negative feedback, this is what drives me to do better and make a map that can be enjoyed on the server for a long time!

I decided to make a comparison image to show all the changes that have been made since the first live version of Lockers on the workshop.

It's absolutely insane to see how far it has already come and the things I've learned in my first 70 or so hours of mapping.

[0.6.1] offline version is live, no fix to custom textures not showing up, but I know how to fix it and it will be fixed soon. Development Feed is going to be slow this week, I'm thinking I'd like [0.7] to be something big, so I'll be working on custom graphics and learning how to use Blender properly.

How much additional physical space does the "outside" take up?

sneaK said:
How much additional physical space does the "outside" take up?
Click to expand...